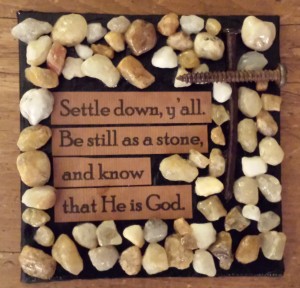 I was telling one of my Sunday preschool colleagues about my new art projects, showing some pictures and explaining, “I wanted to see if I could glue rocks on a canvas.”

She said, “If you’re a person who says, ‘I wanted to see if I could glue rocks on a canvas,’ you’re definitely in the right department.”

Maybe so. I do learn a lot from this class of 4-year-olds.

This past Sunday, our director was out, and I was the substitute “runner of the show.” I was telling one of the kids – he’s probably 5 by now – that we would be talking about Joshua crossing a river. He said, “I thought Joshua had the wall.”

I said the Bible is a big book and there are several stories about Joshua. This was one where he crossed a river on dry land, that God separated the waters and enabled him to do that. The little boy said, “I thought that was Moses.” I explained that God did the same thing for Joshua, separated the river. And just as I walked to another activity area, I heard him say to himself, “It was a sea.”

In any case, whoever it was that wanted people to be able to learn the Bible on their own – Gutenberg? Martin Luther? – they’ll be glad to know the program is working.

This week, we are in fact talking about Joshua and the wall. Walls are significant – building up the ones that are broken down, removing the ones that shouldn’t be in place. I think about things like that. One part of scripture I read on my own for a number of years goes like this:

“The Lord will guide you always; he will satisfy your needs in a sun-scorched land and will strengthen your frame. You will be like a well-watered garden, like a spring whose waters never fail. Your people will rebuild the ancient ruins and will raise up the age-old foundations; you will be called Repairer of Broken Walls, Restorer of Streets with Dwellings.” Isaiah 58:11-12 (NIV)

Oh, to be a repairer of broken walls. The first time I tried that – the first project I created out of broken pieces – was my novel, Life with Strings Attached. Published in 2005 and written over the nine years before that, the topic is a southern childhood in a southern neighborhood; it’s set in 1972 with an undercurrent of social changes taking place. My soundbite was this: “There are two themes. One is a girl and her dog because my narrator, a seven-year-old in a small southern town, is trying to keep a watchful eye on her beagle Pumpkin. Two is a girl and her God because at the same time she’s sensing an early call to God’s service and is wondering how to express it.”

Among the issues I faced in the pursuit of this novel – before I could write about a southern childhood and a southern family, I had to repair something pretty significant: the memory of my actual father. He let us down. I knew I wouldn’t enjoy writing about those experiences, so I reinvented him. I wrote about what he would have been like had he not let us down. In other words, I reframed my memories into a creation that I liked better, and my novel became a sweet and funny story that I enjoyed sharing.

I should mention, however, there were a couple of things about my father that have been useful. He was a good storyteller, for example, and his sisters were funny. Annie, Minnie and Lena. I think it was when Lena died that a family friend told me how funny they were. This friend had lived in Alex City next door to Annie for a time, and she said that when Lena came home from Dallas and Minnie came home from Tallahassee, and she saw that they were at Annie’s duplex apartment, she said, “I could not get over there fast enough. It was like a carnival, they were so funny. And they played off of each other.”

I can imagine. For my sisters and me, our mother was our best audience; there’s never been a better one for us. We could play off of each other and make her laugh. Good memories.

But continuing this other point – the image on my website header is of a rock wall at Callaway Gardens. My mother did a watercolor of that rock wall, and I have it now. It’s in my office. Also, I was at Callaway Gardens with growing-up friends the weekend she passed away. That’s just one of the ways I connect to rocks, to walls and to broken pieces.

That was a delightful story, a gift in fact, and I wrote him a note later thanking him for telling me.

In any case, here’s what I’m getting to: Daddy’s name was Walls. That was his mother’s maiden name. He was a broken man, true, but memories don’t have to stay there. New things can always come from broken things. Like Isaiah said:

“Forget the former things; do not dwell on the past. See, I am doing a new thing! Now it springs up; do you not perceive it? I am making a way in the wilderness and streams in the wasteland.” Isaiah 43:18-19 (NIV) 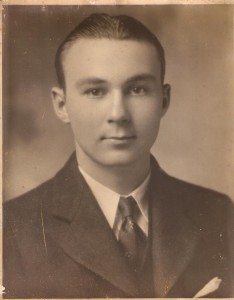 Southerners are gracious, especially at funerals. When Daddy died and people came to say goodbye, they didn’t talk about how he had disappointed them. They talked about his humor, his charm. They remembered who he’d been when he was young. They mourned and were comforted by the memory of the boy they’d known.

I guess the point here is: we often look at others as the adults they are, or were, sometimes as the ones who’ve disappointed us. At whatever age, however, I think God looks at us as children, with the chance for redemption. Where we mess up and see no hope, He still sees hope and a chance for new life.

Oh, to find new life in broken things. That’d be nice. In the meantime, I’ll pick up discards and debris and, as I’m able, turn those pieces into something a little sweeter and funnier.

5 thoughts on “Of Rocks and Walls”