On my stroll through a Montgomery neighborhood this morning, I spotted a large nail at the edge of someone’s driveway. I reached down to pick it up, as I often do, and continued my purposeful walk even as my thoughts went in their own meandering direction. They landed, in fact, on one of the worst decisions I ever made in my life.

I’ll connect these two dots in a moment.

Sometime in the 1990s, I had a series of tire mishaps — one flat after another, or so it seemed. During that period, the threat of flat tires began to hang over my head, like one of those arbitrary fears that not everyone understands unless you’ve been there yourself. So wherever I was, in a parking lot or on a sidewalk or at a curb, if I saw a tire damager, I stooped down and picked it up.

This habit developed out of reaction to my own circumstances, and I was once grabbing the tire damagers from the ground with feelings of annoyance and dismay. These days, I do so with gladness and joy.

To find an old nail in my path, and to be able to remove it from someone else’s path, is my freelance ministry. This morning, I not only found the large nail, but also a tiny nail near someone else’s home. Well, those nails are not going to be bothering anyone’s tires now, I assure you.

I think of these tire damagers as “dangers, toils and snares,” like the old hymn says. They cause trouble. And they’re everywhere. Not every day but many days, whether I walk the same path or turn a different way, I find nails, screws, bolts, shards …

So I like to say that I walk at a “nail’s pace.” Purposeful, intentional but not too fast that I don’t stop for what I see.

But back to that other point. When I picked up the second nail at the edge of someone’s driveway, I started thinking about one of the worst decisions I ever made.

More than 20 years ago, I had moved into a new house. I’d been only a few days in this location, and a number of people were coming by to see the place. I didn’t yet have a peephole in my door, which becomes relevant to the story. Also, I had been working hard unpacking and setting up, and I was tired. So one night, sometime in the 11 p.m. hour, I was sound asleep when the doorbell rang.

I was not expecting to see the man I saw. You can picture for yourself someone you wouldn’t want to see if you are a woman living alone, and it is the dark of night. This particular man seemed drunk, confused, and as if he had been unable to find a restroom before taking care of his business. He asked, “Can you tell me how to get to Union Springs?”

I said, “No,” and closed the door that I had opened. Safe and sound. No further incident. End of story. Except that I often think of that experience as one of the dangers, toils and snares I came through without repercussions. Someone or something else could have been on the other side, and for a pile of reasons — fatigue, confusion, frustration, etiquette — I opened a door I shouldn’t have opened.

Lesson learned? If only.

Between the doors I opened and the ones opened for me, I’ve got a whole assortment of dangers, toils and snares I’m grateful, relieved or embarrassed to have stepped around, through or over. Sometimes I came through unscathed, but not always. Life is tough, but you probably already know that.

In any case, this is the background story for one of the messages in a new series of art projects —  art projects that incorporate the tire damagers collected for years and years, along with lessons learned along the way. And I call it …

These 4″x4″ art pieces have elements of metal pieces found on morning walks, lunch stops and routine shopping, placed around a relevant message. Like this one I created: “Thro’ many dangers, toils and snares, I’ve already come. How about y’all?” 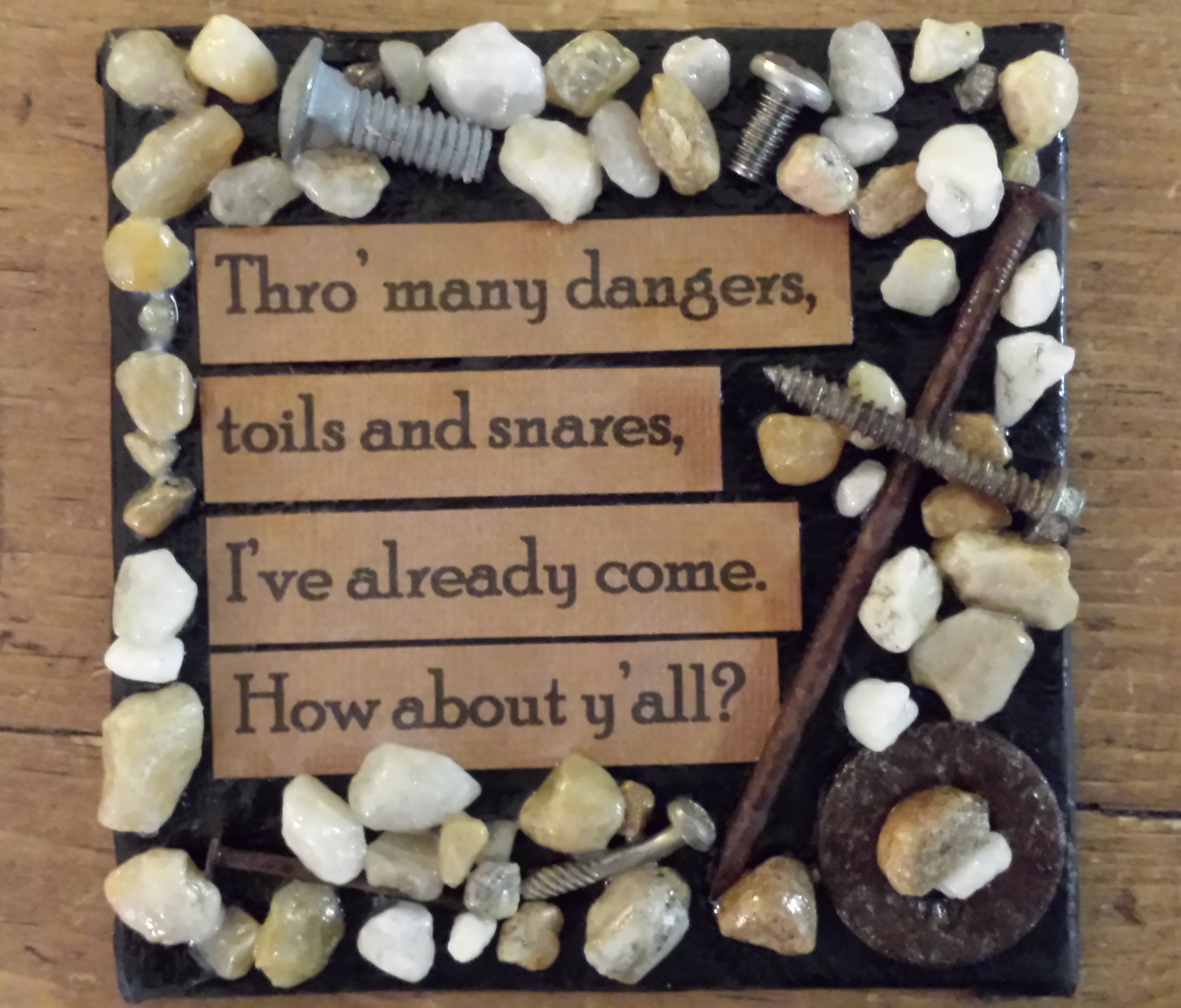 Or this other thought, derived from Exodus 14:13, “Be not afraid, y’all. The Lord will get us out of this mess. Just watch and see.” 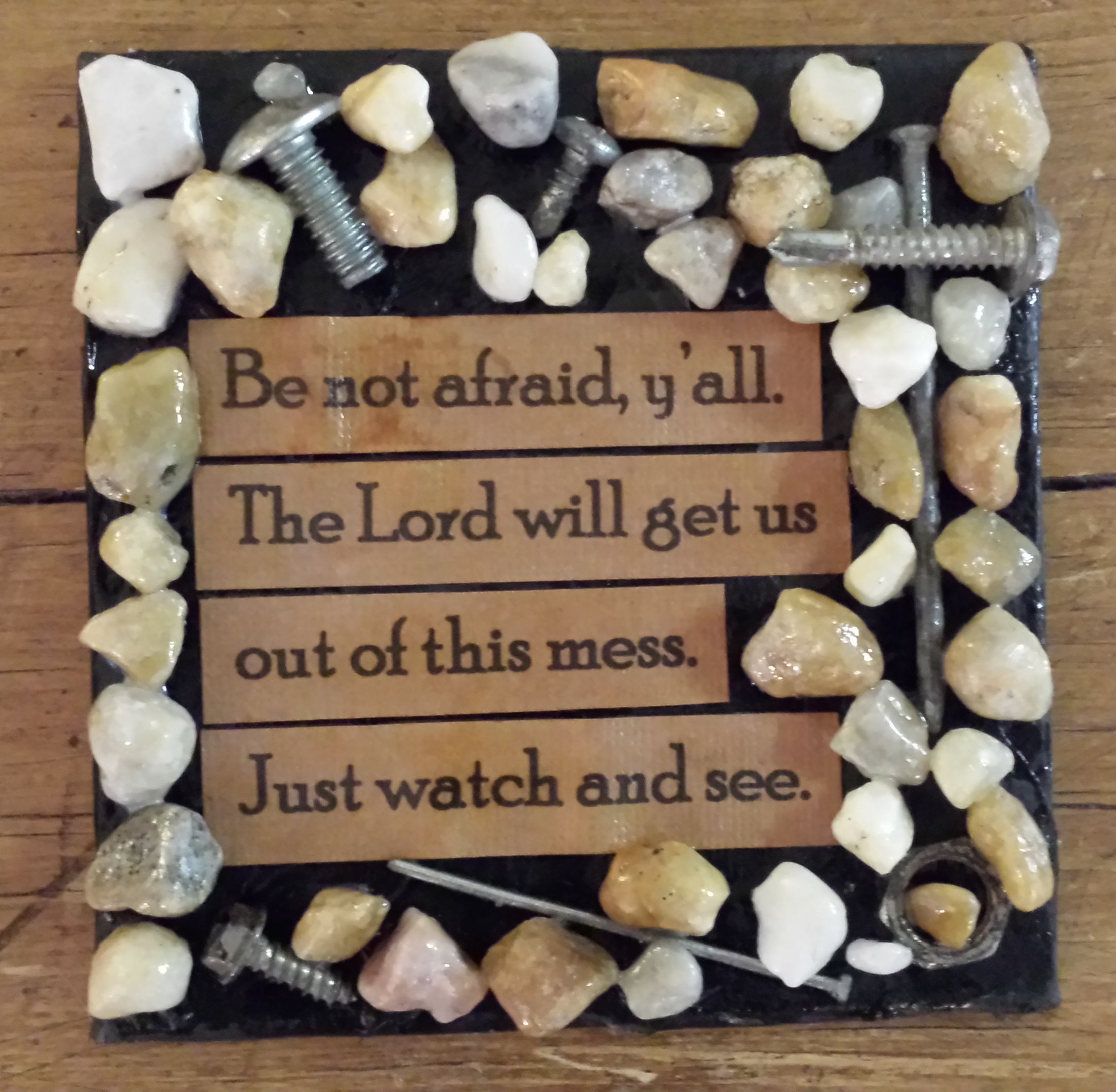 Or this idea: “When You Come to a Crossroad, Take It.” And there are a couple of others too. 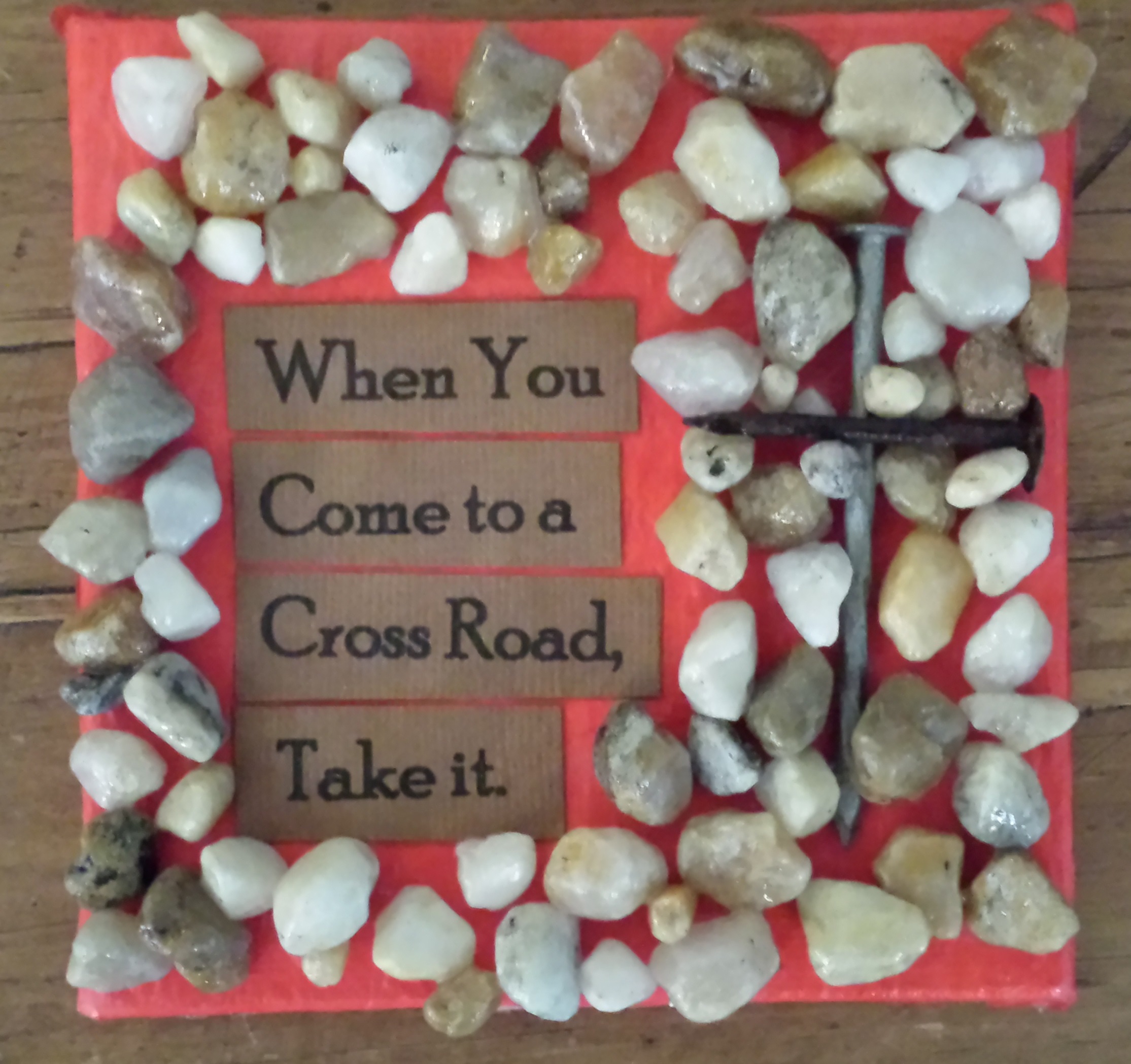 The art pieces are small, 4”x4”, suitable for small easels. They’re hand-crafted, each one of them. Like snowflakes, no two are exactly alike. And they have a story behind them.

I’ll be creating this series until I run out of raw materials. Also, I should mention — at this hour, I’m only opening the door to people in my community (readers of stories and posts and other people of good will). So let me know if you’re interested. You can get the details here: http://minnielamberth.com/the-nails-pace-collection.

P.S. One of the lines I incorporated came out during sorrowful times for the church. Yet people see it, and smile. Learn more here: http://minnielamberth.com/the-nails-pace-collection.