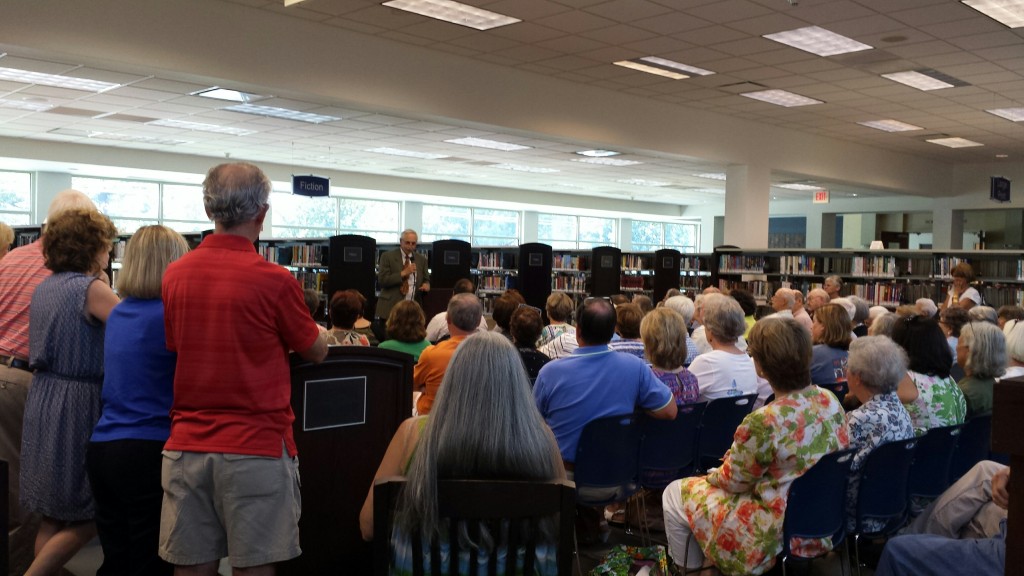 I enjoyed a treat at the Auburn Public Library on Monday when I went with my friend Ellen to hear Wayne Flynt talk about the recently published novel by Harper Lee. It was a packed house, as library talks go — 230 people were reported to be in attendance at 3 p.m. on a weekday afternoon. Standing room only.

He began his talk by saying that people prefer a conspiracy over other possibilities. “Since there was no conspiracy, we can just put that aside and move on to more substantial things,” he said.

Some of what I learned:

Lee left the University of Alabama law school in 1949 to move to New York, having been influenced by Truman Capote. When she got there, Capote left with his partner to live overseas for the next decade. She wrote Go Set a Watchman between 1949-1955, then began dealings with the editor who suggested that she rethink the novel and set it in childhood. That version became To Kill a Mockingbird.

Flynt said that Lee spent a lot of time during this six years on her novel, and he envisioned that it went through many drafts. He suggested that it was not accurate to say that it was unrevised since she likely revised it many times and worked carefully to get it as best as she could prior to the editorial process that led to To Kill a Mockingbird.

Incidentally, Flynt said she was Capote’s researcher for In Cold Blood, and though Capote dedicated it to her, in Flynt’s opinion, she should have been listed as a co-author.

He said the novel is a backward glance into a world of enormous conflict where we are not our father’s children.

Flynt spoke of a number of racially-related incidents that were happening in the 1950s and that Harper Lee was processing all of this in New York. At parties, people would ask, “Where are you from?” When she says, “Monroeville, Alabama,” he says from his own experience, “I have watched conversations stop over that sentence.”

Flynt also talked about how her revered older sister Alice stayed in Monroeville, worked to integrate the United Methodist conference and did other valuable work as an insider. He said you come to a point where you realize you are living in an imperfect place and how do you live there with integrity. “The difference is one of strategy — do you change a place by leaving or by staying?”

If you stay, that will demand something of you. You will have to say that this is your place, that you are from here too, and you can have your opinion as much as another. In other words, you can work for change where you are because it is your place as much as someone else’s.

The lawyer who is seen as the devil in the story – I didn’t get all her details, but there was something about having sons in Catholic seminary. I gathered that she was easy to view as the villain because she is an outsider. She’s not from around here. She had worked with Miss Alice and had been encouraged by her to attend law school. She married the son of someone who was close friends with Capote and Lee. When Lee became her client, she sued Lee’s former literary agent for copyright infringement. Also, from what I understand, if she hadn’t sued the museum for copyright infringement, some very large entity could have piled up millions of infringed dollars and used the museum as an example of why that was OK.

Flynt said that when he spoke to Lee after the announcement about the publication of Go Set a Watchman, he asked something to the effect, “Are you excited about your new novel?”

She said, “What new novel? I haven’t written a new novel.”

He said he had a moment where he wondered if the conspiracy theories were true, but he prompted her, “Your novel… Go Set a Watchman.”

It was an interesting talk.

One thought on “Stopping by the Library on a Monday Afternoon”