All of that is to say, my great-grandparents were living in this house in Tallapoosa County when my grandfather was born … this was during President Grant’s administration… and it came about that one Sunday afternoon in June I entered this old house, guided there by my cousin Grady.

He had showed me several spots of interest before we got here. Cemeteries, mostly, but some places where things used to be. One road was a dirt road. I was driving my Sonata, a reasonable car for most in-town treks. But like an old lake road, I did have a concern that someone might be coming the other way. It wasn’t a one way. But it did seem like a “one at the time” way. When we got to an old bridge, I asked, “Is this OK to cross?”

My cousin reassured me, “You’ll be fine. If there was a problem, there’d be a sign that said ‘bridge out.’”

Comforting for sure, but I was thinking, “What if a few minutes from now, I become the reason they decide to put a sign that says ‘bridge out?’”

I had another concern that I’d have to go back the way I came – recognizing the longer you go down a deadend road, the longer you have to come back. But that wasn’t needed; this was a road that went to somewhere. He said, “I’ll take you back on blacktop.” Which we reached soon.

The house we visited was in the back of someone else’s house. We pulled into the driveway so my cousin could go in and ask the owner if we could walk through. This he’s done before, and this was not a problem. You just want to tell people you’re walking through their yard.

First we came upon a structure that was my great-grandfather’s old store. Then we got to the house. We walked through an area with high weeds, and I watched every step I took. Then we got to the steps. As my cousin beat back some of the brush, he said, “There are a couple of things we want to be aware of before we enter.” I could anticipate what these things might be. “First, we might fall through the boards, but it’ll only be about a two-foot drop.” Check. “The other things are wasps and bees… and snakes.” I could have seen that coming a mile away. 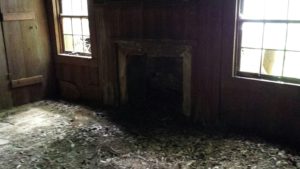 But we entered, walked carefully, and there was no problem. He showed me the room where my grandfather was born. I didn’t know him; he died about 30 years before I was born. I haven’t spent much time thinking about him, wondering about him. But in that room where he was born, I felt something profound. It wasn’t exactly a sense of the holy, or even something in the area of awe. But I was very moved. Perhaps it was a sense of the eternal, of people behind me and in front of me, in this long line of old people.

My cousin had told me my grandfather’s bedroom was just up those stairs, if I wanted to go see. After a few minutes, I said, “I’m not going to be able to go up the stairs.” 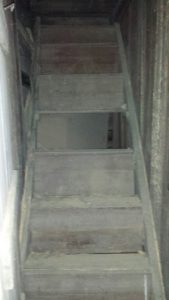 “No,” I said, “I’m not going to be able to do that.” Some things you just know. But I did use the flash to take a photo, and that seemed good enough.