Last Thursday I drove to Birmingham for reasons having to do with the fact that I bought six containers of Play Doh in 2008. Or maybe it was because I was working at an advertising agency in the late 1980s when Autauga Medical Center opened a teen treatment unit. But it was also because I spent a dozen years working with a company that developed content management systems for church websites.

The point I’ll get to is this: whenever I have a new opportunity for my work as a copywriter, you can sure bet it’s because of something else I’ve already done.

I’ve told this story in other places. In 2008, my great niece Sally was turning 2 years old. Her mother said she needed new Play Doh. I said I’d get it. At the time I had no idea I could get this done for so little investment: six containers totaled about two dollars. When I found them at Target, I pulled them off the shelves and headed to the checkout line, where I saw my PR colleague Lenore checking out ahead of me.

We spoke. She asked, “Are you still freelance writing?”

That, again, is how that Play Doh investment turned into projects for the Business Council of Alabama, and, eventually, a coffee table book sponsored by the BCA to promote economic development. Also, when Lenore moved on to become editor of Alabama Living, she didn’t have time for an article assignment that she’d been offered for Business Alabama. She gave the editor my name, and that’s how I ended up at an economic development conference last February, where I ran into another long-time colleague, Julie.

About that. In the late ‘80s, Julie was marketing director for what was then Autauga Medical Center, and I was a copywriter for the ad agency helping her promote the new teen treatment unit. Now she’s with Central Alabama Electric Cooperative.

CAEC has a leadership consultant who assists with their organizational planning. One day Julie and Mike were talking about a project for another of his clients, and, having seen me at that recent event, Julie gave him my name and contact information. He called on her referral. That particular project didn’t pan out, but when I followed up later to check on its status, Mike and I began to talk about some of his own projects.

We’ve gotten through many of the pieces of Mike’s projects, but as we get into next steps, I thought the person who would best be able to help us move forward is my buddy Jason. I was his client for about 12 years when he was marketing director for Axletree Media. Now he’s running his own branding and marketing shop, and he and I set a time to meet with Mike in Birmingham. And that’s why I was driving I-65N last Thursday thinking about how I got on that road in the first place.

All I can say is, in this work, nothing starts today. Or, rather, everything that starts today actually got its start sometime back. 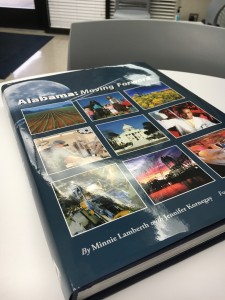 This week I received an email from an advertising colleague who said she was sitting in the security building of the Toyota plant in Huntsville and saw that BCA coffee table book, Alabama: Moving Forward, on the table. Cate sent me a picture as proof. Last week, I got a text from a PR friend who was in Washington calling on our congressional delegation. Linda saw the same book on Senator Sessions’ coffee table and sent me proof. So sweet they both did that. I was touched.

The point is: I wrote those chapters in 2011, five years ago. I was pretty sure the book had been forgotten, until I got these reminders that those contacts that came this month were generated by something that happened a long time ago. In this work, things don’t drop in out of the blue, or pop up out of the ground, or fall down from the sky of their own accord, even if it seems that way, because everything comes from something that came before.

This week I’ve been working on a big new project. I’m pretty sure that I can trace that back to my seventh grade science teacher because the work’s being done for her son. Also, I have a new assignment writing/editing a newsletter for the Montgomery Area Council on Aging. That came from my PR colleague Rosemary, who was visiting the agency for a Leadership Montgomery meeting when someone mentioned a need, and she mentioned my name.

You know what’s been pretty good preparation for me to interview clients being nourished through the Meals on Wheels program? All those stories I wrote about people I met at church….

So, if you should be out someday and you hear of someone who needs website copy or case studies or an email series or blogs or white papers or articles or other types of stories for their businesses and organizations… I hope you’ll think of me. Whatever it is, I can tell you this: I’ve been getting ready for that opportunity for a good long while.

Be not afraid, y’all.

“Sow your seed in the morning, and at evening let your hands not be idle, for you do not know which will succeed, whether this or that, or whether both will do equally well.” Ecclesiastes 11:6 (NIV)