“The place God calls you to is the place where your deep gladness and the world’s deep hunger meet,” Frederick Buechner says. That’s one of the oft-quoted quotes of this theologian and author of 36 books, and it’s a conclusion he draws in reflections about vocation:

“Like ‘duty,’ ‘law,’ ‘religion,’ the word ‘vocation’ has a dull ring to it, but in terms of what it means, it is really not dull at all. Vocare, to call, of course, and a person’s vocation is a person’s calling. It is the work that they are called to in this world, the thing that they are summoned to spend their life doing,” he writes. 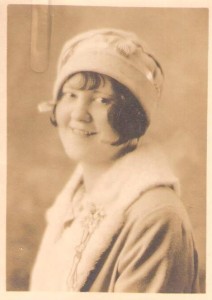 My Aunt Minnie helped me find my vocation, though it was only in her passing that she began that process. She died 20 years ago last night. She was 87 years old and alone inside the home on Hillabee Road in Alex City where my father’s family set up housekeeping in the early 20th century. I do not know the cause of Aunt Minnie’s death – not precisely. She was small and frail, with crippling arthritis in hands and feet, and had had some health issues, including surgery to repair an aneurysm of the heart.

But there was something else going on that night that makes me wonder about the stress she might have been feeling. Hurricane Opal, a category 4 hurricane, had made landfall in the Florida panhandle and was making its treacherous way up through Alabama. I remember listening to the frightening sounds of the storm outside my own door in Montgomery. I could not sleep; I could only listen. I had no electricity, but I did have a battery-powered radio. So I listened to the storm and the news of the storm. At midnight, all became calm. I turned off the radio and went to sleep.

The next morning, I checked on everyone I could think of – my closest relations and friends. My mother was in Texas at the time visiting my sister Jane and her family; they weren’t even involved in the storm. So all were safe, all was well. But that night I got a call from Aunt Betty.

You can’t imagine what a sudden transition this call was for me. At the time, I had not grown into a person who received and distributed family information. My mother was the priest of family information; all requests, petitions and concerns went through her, and she passed them along to me. That was how things happened. If my mother was out of town, the next logical person would be my sister Anne, the eldest. The problem was, Aunt Betty couldn’t remember Anne’s last name to call “information” (an Old School term for Google). So it was left to me and my memorable name. I received the call from Aunt Betty with the news that Aunt Minnie had died during the night. I then had to call my mother and tell the others.

I’ve told this story before. With Aunt Minnie’s passing, as the bearer of her name, I received a portion of her cash. The summary is that her gift enabled me to have the courage to leave a position in state government, where I did not belong, to begin the process of transitioning to self-employment as a marketing copywriter. Also, I found the time and conviction to write the novel that would become Life with Strings Attached.

On October 1, I marked my 15th anniversary as an independent writer, my vocation. I also made another transition. I became operator of half a booth at Amy’s Antique and Flea Mall (849 N. Eastern Blvd.) where I am selling pieces in “The Nail’s Pace Collection.” I placed a good number there last Friday, and I’ll be adding more and more. Who knows? Given all the pennies and nickels I pick up, I may create a new series called “The Coin Collection.”

I’m also exploring a new set of pieces. I’ve figured out a bit about transferring photos to canvas, overpainting with oil, and then adding words with gel pen. That took a lot of figuring, but as a copywriter, I should tell you, figuring out the words I wanted to say took just as much time as anything else. I finally settled on something I most needed to hear, and that’s how I came to this “Walk in peace” piece. 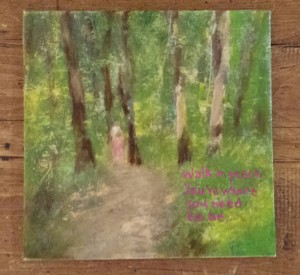 Anyway, back to Aunt Minnie. At her funeral that Saturday, the preacher of her church, Dr. Hallmark at First Baptist, talked about what it was like to visit Aunt Minnie in her home. He described her hands, and how they were misshapen from arthritis. He said he never shook her hand, thinking that might cause pain or injury. Instead, he held out his hand to her, palm up, and she put her hand in his, and they shook gently that way.

The preacher said he thought that’s probably how Jesus did it. When He came to take Aunt Minnie home, He held out His hand, and she placed hers in His, and He took her to be with Him.

For I am the Lord your God who takes hold of your right hand and says to you, Do not fear; I will help you. Isaiah 41:13 (NIV)

6 thoughts on “Of vocations and hurricanes”