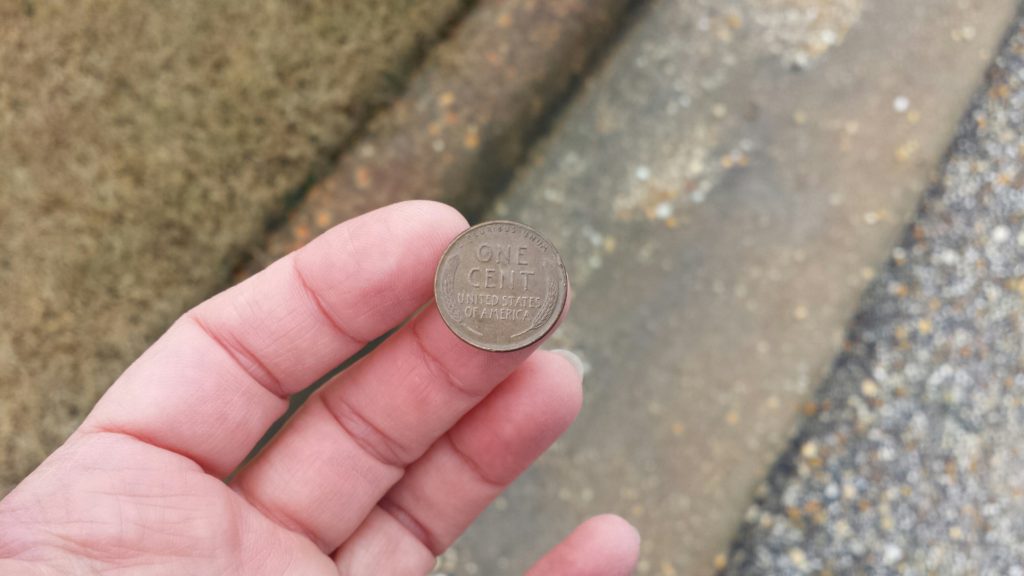 On my morning walk, sometimes I’ll see coins. Pennies are common, a nickel is nice. Quarters are exciting – because they’re large and shiny and I can probably use them in a parking meter someday. If I see a coin, I’ll scoop it up and keep it without giving it another thought. But one day I saw something so unexpected that I was concerned. I was walking along a curb and came across a roll of bills that quickly counted out to sixty dollars.

An extra sixty dollars would be nice to have, I grant you. Who wouldn’t want another sixty dollars, but it was too large an amount to scoop up and keep walking. So I stopped to think. My best guess was that the dollars were associated with a particular house. I went to ring the doorbell. No answer.

I didn’t know who belonged to this money, but I did not lose this money for that person. I didn’t see it as my full responsibility to find the rightful owner, but I did see my responsibility thusly: I couldn’t walk away with someone else’s sixty dollars. After much deliberation, I opened the mailbox at the curb at the house where I thought the money was most likely associated, and I pushed the dollars inside. Then I walked away, having done the two things I knew to do to give the money a chance to be returned to its owner.

That was several weeks ago, and I do not know what happened after that. But what I gained from the experience was this picture of walking away having done the best I knew to do – while also accepting a general belief that in a divine economy of some kind, what is lost is found again.

A change of perspective, in other words. 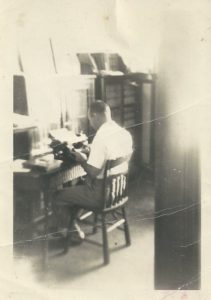 In May 1942, my father typed a charming letter home from World War II that involved losing coins on a bus trip across town and finding them again on his return. He begins, “The most entertaining, true story that has ever happened to me, this day at 12, during a typical Hawaiian day, extremely and almost unbearably hot, I boarded the Waikiki Bus, for the Waikiki District, on regular assigned work.”

At the time he wrote this letter, he was in a part of the country that had been bombed only a few months earlier. America was losing the war so far, and he was away from home. So, knowing of him from later in life when he experienced a lot of issues, I wondered if I could rewrite that story into something that would change its meaning for me. That’s how I came to:

The Father’s Fare
By Minnie Lamberth

Sometimes this world takes you places you don’t want to go.

When the plane landed, the ensign was in a crowd that lifted to its feet with a mix of unspoken uncertainty and “let’s do this” bravado. Jostled by the people around him, he stepped out into a tropical paradise, felt a wave of heat from the tarmac.

Breathtaking … and yet. You would hardly say “what a beautiful place” without being aware of the devastation that had spewed from earlier planes. Even if you did take notice of the blue-green water, you would still look up from time to time. You’d see the billowing clouds, squint at the piercing sun, and wonder what terrible thing might be just beyond the horizon.

He was so homesick he could barely breathe. And he was afraid.

Some days after he had settled in, he was sent on an errand across town. “With my luck this is the day the bombs come back,” he thought. He didn’t want to go.

As the bus pulled up to the stop, he stepped on, paid his fare, and the conductor handed him his change. He clasped the coins while squeezing into a tight space filled with silent men and women – civilian and military, locals and outsiders. Words were stifled by the unbearable heat and by thoughts of that unknown horizon.

He grabbed a strap with one hand as he tried to place the change in his pocket with the other. But easy things were hard to do, and when he released his grip, the coins missed their aim and fell to the floor. Two dimes, a nickel and a penny bounced and rolled away.

Every silent eye saw that the coins were out of his reach, and no one could help. He imagined everyone felt the same weight of helplessness and difficulty, as if the unknowns beyond the horizon were so present they couldn’t even tend to those coins on the floor.

Sometimes this world takes you places you don’t want to go. And you will find things there that you cannot repair, retrieve or undo.

The fares we pay for our journeys can be quite high. But here’s another thing to consider. If you tell the story that life is unfair and this world is unsafe, you will tell a true story that you will surely believe.

Or you can tell a different story that is also true.

This world is one of loss and restoration. That’s the system. When you give, you receive. When you hold things loosely, you feel more together. If you step away from a puzzle that cannot be solved, you will feel a sense of reconciliation from the simple act of letting go. When you walk away, there is a return. In loss, there is gain.

That’s what happened that day on the errand across town. After the ensign’s assignment was complete, he headed toward the bus stop for the trip back to the base. When the conductor opened the door, he paid his fare and turned to grab a strap. Then he looked down, and there on the floor he saw two dimes, a nickel and a penny.

He almost cried. Not over the money, for there would always be coins that fell to the ground, but from the idea that heaven had reached through that troubled horizon to offer the reassurance he most needed to hear: What once was lost will be found again.

Fifty years away, the ensign’s long journey has neared an end. By now his coins are few and far between, and he stares helplessly at the distance ahead. On his own he can go no farther, and, conceding defeat, he sees the battle is lost. There’s no way he can find his way home from here. And yet… from somewhere beyond that unknown horizon, a Father’s voice draws near: “Do not be afraid, my son. Your passage has been paid.”

Are not two sparrows sold for a penny? Yet not one of them will fall to the ground outside your Father’s care. And even the very hairs of your head are all numbered. So don’t be afraid; you are worth more than many sparrows. Matthew 10:29-30 (NIV)