When my Aunt Minnie passed away in 1995, I received some of her belongings – among them, a handwritten class prophecy that she had prepared for her high school graduation in 1924.

In her script, she used an interesting creative setup. She wrote, “Since this is an age of doing things rather than thinking them, I am going to use our most modern invention, the radio, instead of gazing into a crystal ball or the dying embers of the fire.” From there, she wittily envisioned radio broadcasts that gave news of classmates’ future lives. I can still hear the humorous timing in her words even at that young age so long ago.

She wrote, “Station S.I.C.K. is broadcasting the results of a successful operation performed by Dr. Roger Stevenson – and stating that the funeral service of the patient would be conducted by Rev. Paul Farmer.” If those are your classmates, that’s funny.

She writes, “Next I get a station across the waters. England it is. A powerful drug has been discovered by Sadie Gross – which leaves no trace in the body of its victim when used as a poison.” She goes one way, then boom, the unexpected joke.

Later she writes, “Thirwell Nolen, Old Sugar, is coaching football and walking off with all state honors. Having defeated Sidney Lanier 3 years, he is now trying to schedule a match with the Lumber Yard.” Funny stuff, and great timing.

There’s more right until the end where she writes the inspirational send-off: “Jewell Nolen and Evelyn Harris are authors of renown in classical literature and bid fair to keep our class of ’24 being so that from their heights the stars will see us and the earth will prove herself our friend, and we shall meet with kinship of understanding hearts on our way.

“As for the prophet, I’ll just say as Corinne did in the Jr. play – ‘Just keep your eyes open and you’ll see what you’ll see.’”

That last line is the one that is most memorable to me, and I have thought of it often and wondered what I would see if I kept my eyes open. That’s what I’m thinking about today, and I was probably thinking of that line when I wrote this brief blog in 2013:

I hope I live a good long while, with sound body and mind, a happy heart and provision to keep me sustained. But when the day comes to pull the covers around me one last time, it might not be too hard to turn my brain back in.

“Here,” I might say. “I tried to figure some things out, but I’m not sure how well I did. You’ll find a few areas in there that are still pretty perplexed.” When I turn my heart back in, I hope I’ll be able to say, “Careful with this one… it got broken in a few places. But lots of people are in there, and I’m pretty sure it grew larger as the days passed.” Oh, about those hands and feet, I’ll probably have to admit, “I’m sure they could have done more. But I did spend a lot of time trying to dig back up those talents I had buried. So there’s that.”

When the day comes to pull the covers around me one last time, I won’t be sorry to turn back in the memories of sorrow and pain, whether close up or far away. But I’m confident of this. When I turn back in my eyes, I’ll be able to say, “It was just like You said. I saw the goodness of the Lord in the land of the living.”

Some verses stand out, they seem more noticeable, like this one: “I remain confident of this: I will see the goodness of the Lord in the land of the living. Wait for the Lord; be strong and take heart and wait for the Lord.” Psalm 27:13-14 (NIV)

It’s a good verse year-round, but seems particularly fitting in this season of Advent – a time of expectant waiting. The prophecies foretold these days. Something good is coming; keep going. Or, said another way: Keep your eyes open, and you will see what you see.

I have noticed how my creative endeavors have been based on learning to see. A few years back, when I was painting my Lambscapes – mini-portraits of children – I had to learn to see the specifics of the head and face. As I experimented with the artworks, I soon realized that if I didn’t study the original image but instead went about my merry way painting without regard to accuracy, I would miss the big picture. Or, to be more specific, the little picture on the canvas. The head would be the wrong size, the eyes in the wrong place, the nose too long – all of which matters greatly in a mini-portrait. It’s important to pay attention so that, through your effort, others can see as you have seen.

Creating The Nail’s Pace Collection has also about seeing but less in the final artwork and more about seeing the pieces of debris as I pass by. I have more than a decade of experience picking up these discarded, misplaced pieces, and I have an advantage because I look down when I walk. This is a time for thinking, reflecting, and so I look down. It’s how I think.

Others might look up as they think and reflect. You’ve seen how this goes. They throw their eyes up, pat their finger on their upper lip and say, “Now, let me see… I was a senior in college that year, and… (or whatever).” Or some squeeze their eyes shut so they can concentrate: “Twelve times thirteen is… wait, three times two is six… (or whatever).”

And some look down, as I do, working through the puzzles in my mind. That’s how I see things on the ground. This is also what happens. The more I see these pieces, the more I’m likely to see them — because my eyes get used to the sight. 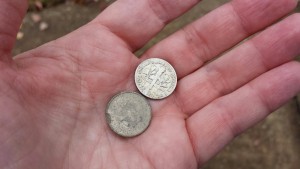 But I don’t always see the full picture right way. On one of my morning walks, I found what I’ve been looking for, and I didn’t even know it. I thought I was seeing twenty cents, but I later realized I’d found a new pair a’ dimes. How about that? Or maybe an old pair a’ dimes that needs adjustment? Sort of gives new perspective to the thought, “Be the change you want to see in the world.”

New ways of seeing things, new paradigms… these are good things to find on a morning walk, good ways to pursue change. This season and each day is the time to go out, expectant and waiting, confident that you will see the goodness of the Lord in the land of the living.

Be not afraid, y’all.

P.S. Christmas shopping? You can find pieces from the Nail’s Pace Collection in my booth at Amy’s Antique and Flea Mall (enter the front door, take a left, go three rows, turn right) or at Alabama Street Makers Market in Alex City. Or just ask me, and I’ll get them too you.