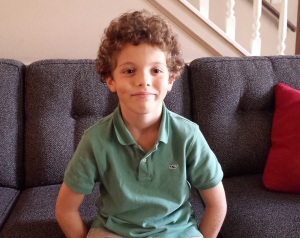 Sam Hartzog is a really cool kid. He’s in my church family, and I knew about him even before he was born. But the two of us didn’t have a chance to sit down for a long chat until he was 8 ½ years old. On this September Sunday, while we waited for Summer and Johnny to prepare our lunch, Sam told me he’d be turning 9 on January 16.

“A winter birthday,” I said, because I’ve always had a knack for the obvious.

“That’s what I like about my birthday,” Sam agreed. There’s warm and there’s cold. “I like both those temperatures,” he said.

I found out that Sam likes a lot of things. I sat on a hearth in his Montgomery home while he leaned forward on a couch and told me about his life.

Sam is a third grader at Bear Exploration Center, which he likes a lot. “All the teachers are great,” he said. “It’s got my favorite subject: math. It’s a magnet school. I like magnet schools.”

Math, he explained, has numbers. “It’s pretty good to get my brain going… to get my gears a’ going.”

I remembered that I learned my multiplication table in third grade so I asked him about that. “I do some multiplication,” Sam said. “I know all my twos, my ones and my zeros. I haven’t gotten into my fours, fives, sixes, sevens and so forth.”

Then I asked Sam about First Baptist Church, which is where we met. During the school year, he has come through the supper line on Wednesdays many times, and I have served him dessert.

“My Sunday school class is actually fun,” Sam said. He said he’s in the same room for Sunday school that he’s in for Choir Kids. This is where children of adult choir members hang out during the “big choir” rehearsal. Sam is also in children’s choir which he says is really fun.

Sam told me that in his choir, they have signs on the wall that are broken down into categories, which he mentioned: Ready to Sing, Super Sing, Have to Talk to a Parent, Shape Up Seriously. “Seriously is underlined,” he said. There are a couple of more categories, and kids know their status based on where the paper clip is. “So far, everyone’s still on ‘ready to sing,’” he said.

I asked who his teachers are, and he said, “One sort of looks like you except her hair is longer. I’ve got Mac and Thomas’s mom. Do you know them? They’re twins. In Sunday school, I’ve got their mom and dad.”

So I asked Sam about Sunday School. He said that particular morning they had talked about the garden of Eden. “We talked about how God created the world before that and made Adam and Eve and all the animals, the sea, land and air.”

As he explained how God created the world, Sam said, “It took Him six days and on the seventh day He rested. Some of my classmates get confused with that.”

I asked what part confused them.

“They couldn’t figure out if it was six days or seven days,” he explained.

On Sunday nights, Sam is also involved in R.A.s. This is a program for boys first through sixth grade. “It’s my favorite thing at church,” he said. Then he explained, “At snack, sometimes we have bacon and pancakes. Sometimes we have pizza. Sometimes we have chips and cheese dip.” Then he clarified, “Well, not cheese dip… we have some sort of dip, but it is yellow.”

He went on to explain, “We tell the Bible verse we memorize and then we’ll do some activities and do some R.A. magazines. Then we’ll start talking about stuff. Then we’ll have supper. It’s pretty fun.”

He added, “The best part about it is that my dad teaches it.”

Summer and Johnny formally adopted Sam seven years ago as part of their family with daughters, Rena (32) and Rachel (30). What they learned the first time around, they’re trying to apply the second time around.

Johnny said, “We’re trying to be more attentive and engaged with him.”

Summer added, “That’s the advantage of a do-over. We know what requires more attention and what doesn’t.”

I asked Summer about raising a boy in the church. “I don’t see how anybody does without it,” she said. “There is so much out there to pull your kids in the wrong direction.”

A church provides structure, she said, and while it’s not perfect, it’s important to “know that you’ve got people you belong to that belong to you.”

Before I finished, I asked Sam if he had anything else to tell me that I hadn’t thought to ask about.

Indeed. His room was not supposed to be a part of the authorized tour, but Summer allowed us to proceed as long as I didn’t judge and kept my camera downstairs. All I can say is, Sam’s room was just as he described.

Memories of the Father

In addition to his immediate family, Sam was born into a very large church family. He became a member of this family during his profession of faith and baptism in first grade.

Summer said that from an early age Sam was interested in the church and the salvation story. Even as soon as 3 years old, he wanted to walk down the aisle and accept Christ. She’d try to tell him, “You’re too young, you’re not ready for that, you don’t know what it means.”

One day she mentioned Sam’s early interest to my fellow kitchen worker and retired pastor, Henry Lyon, who said, “The Lord knew us before we were born, so it makes sense that we might have known Him too.”

Summer said, “I’d never thought of it that way.” She said that, knowing things wouldn’t be easy in the days ahead, it meant so much to her that Sam “might have that tiny recollection of being with the Father.”

These mysteries we’ll have to figure out later, but I think of them too. In fact, that’s a thought I was puzzling through in a parable I was writing just a few weeks ago within a work of fiction. I imagined that first encounter might go something like this:

From the moment this child was anything at all, the Great Potter whispered into her soul…

These eyes, this nose

My love through and through

For the wonders of you

And you belong to Me.

“Sunday Lunch with Sam” is part of “People I Met at Church,” a continuing series by Minnie Lamberth.

6 thoughts on “Sunday Lunch with Sam”