Ruthie Grace Blakeney could very well be one of the best-known 4-year-olds at First Baptist Church. Two nights before I was to meet her in the preschool class where I now spend 90 minutes on Sunday mornings, I’d called my friend Lynne and told her Ruthie Grace was on our roll this year.
“She’s very verbal,” Lynne offered by way of introduction. And she cited an example from a class last year. When another teacher sat on a table during group time, Ruthie Grace asked, “Do you think sitting on that table is a good idea?”
“Probably not,” the teacher said as she scooted off.
This kind of detail is good to know, and I’ve been careful not to sit on tables in Ruthie Grace’s presence. Before the class began, I also learned that she operates her chair very well, and, if preferred, she can crawl anywhere she needs to go.
On that Sunday when I met Ruthie Grace for the first time, I did indeed notice her verbal skills — and also that she really loves her mother, as I had been advised as well.
Separation is a little hard for Ruthie Grace. When she was sad that first Sunday in this new classroom, one of our quarterly teachers, Miss Becky, rushed to her side. Becky told her a story about what she tells her own kids — basically that you get back what you give. By way of explanation, Becky showed Ruthie Grace a really sad look. “When you do a face like this, what do you think you get back?”
“A sad face,” Ruthie Grace said.
“Right.”
“And when you do a face like this (really happy face), what do you think you get back?”
That answer: “A happy face.”
Right again. This exchange and others were enough that when Becky left the room a short time later, Ruthie Grace said, “She’s a really nice lady.”
Very verbal, for sure. And that’s why Ruthie Grace seemed like such a good candidate to interview for this series about “People I Met at Church.”
I’d mentioned this possibility to people I’d interviewed before. All, like me, are many decades older than Ruthie Grace, and they all knew her. I’d mentioned her name to other ministers, other friends from church — everyone knew her or knew of her. That’s why I feel confident in saying that Ruthie Grace’s name recognition is very high for a 4-year-old at church.
So I made plans for the interview with her mother, Mendy, and set up a time. Because I wanted to interview Ruthie Grace and Mendy together, I prepared the questions in advance, sent them to Mendy for review, and we scheduled our talk for one day right after Sunday school.
That morning, when I walked into the room, Ruthie Grace was already there with her mother. She told me, “You can interview me any time you want to.”
“We better wait until after Sunday school,” I said, “because there are about to be a lot of people in the room.” So we waited, and when everyone else had left, Ruthie Grace, her mother and I sat down at a table in the preschool room, while her grandfather, who’d driven them this day, waited nearby.
I started with her mother’s questions. In hindsight, I should have started with Ruthie Grace — because during her mother’s questions, she often asked, “When is it time for my interview?” There were many comments during this part of the process as well. For example, as I started scribbling Mendy’s words in my yellow lined legal pad, Ruthie Grace peered over to my notes. “Look how she’s staying in the lines,” she observed.
“Yes, and she’s writing very fast too,” her mother added. And here’s just some of what I learned while I was writing fast and staying in the lines.
Ruthie Grace was born on May 25, 2009. She came into this world with a congenital disorder called spina bifida. According to the Mayo Clinic, “In babies with spina bifida, a portion of the neural tube fails to develop or close properly, causing defects in the spinal cord and in the bones of the backbone.”
Three weeks after birth, Ruthie Grace was adopted by Mendy Blakeney, a single mother and pediatrician. Today, she lives in a home with her mother that they share with her Nana and Granddaddy.
“Ruthie Grace came to us when she was three weeks old,” Mendy said. “We went to her because she was still in Children’s Hospital.” She had had a surgery to correct a defect on her spinal cord shortly after birth.
Welcoming Ruthie Grace into the family had been some time in coming. “I had been thinking about adoption for a while,” Mendy said. Her thought processes involved a great deal of prayer, scripture reading, counsel from friends. And the idea kept being confirmed over and over. In her work as pediatrician, she said, “It seemed like everybody I was taking care of was adopted.” 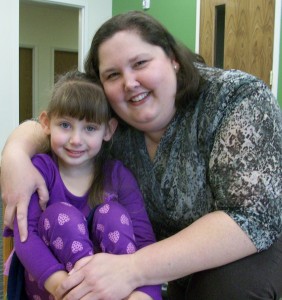 Mendy recognized this was a huge decision — and one not taken lightly. She asked herself questions, such as, “Can I do this physically and still work?” She questioned the theological implications. “Is this something God would approve of?” She looked at how this is a departure from tradition. “I want to have a baby. I’m not married. Is it okay for me to take this into my hands? Is it okay for me to be single and take on that responsibility?”
She approached her parents early in the process and asked if they would be supportive. They were. She went to her partners at work. “They were very supportive,” she said. She went to her brothers and asked if they would be her backup if something happened. They agreed. “Everyone who was important and helpful was on board,” Mendy said.
As the adoption home studies began, she said, “They had me fill out a form about who will I be willing to accept.” The form had a check box for a variety of physical issues. “It struck me then that some parents would be overwhelmed by some of these issues.” So she called the agency and said, “I wanted to let you know that I’m a pediatrician and would be willing to adopt a child with special needs.”
On that occasion, the adoption agency told Mendy that children with special needs are usually placed through DHR. However, a short time later, Mendy got another call from the agency. “You’re not going to believe this,” the agency representative told her. “A family just moved to Birmingham and had a baby with spina bifida. She’s at Children’s.”
Mendy went to Children’s. “I got to meet the first set of people who loved Ruthie. Right after that, I met Ruthie.”
Ruthie Grace’s Interview
Ruthie Grace was still eager for her interview. So I told her that when I turned the page, it would be time for her questions. “This is what I’ve been waiting for,” she said.
We started with some simple questions. I asked about her family, the people who live in her house. I asked her what she likes to do with her mom. “A lot of things,” she said. She listed playing with play doh, reading and going to Target and Cucos. She also likes to visit the library at Hampstead.
With her Granddaddy, she said she does things like go the pumpkin patch. They’d gone there the day before and picked out a pumpkin. With her Nana, she said, she helps wash dishes.
I asked her about the mornings she goes to school. What happens? “I have to put on my uniform, leggings, socks and shoes.”
“What else do you have to put on?” her mother prompted.
Her braces.
I asked Ruthie Grace who takes her to school. “My mom,” she said. Then she added, “That’s silly. I don’t know how to drive a car anyway.”
Her mom offered, “Well, you could have ridden the bus.”
That comment took Ruthie Grace through her own thought processes. “I wouldn’t have time to grab everything I need. I would forget my water bottle, my snack, even my backpack, which is important.”
I asked her what she’s learning in school. This year, she’s studying her 2’s and 3’s — and her name. She told me her teacher was Ms. Dickens. She named a teacher’s aide, Ms. Painter. At this point in the interview, however, Ruthie Grace said, “I need to take a break. I need to roll around.”
So she did. She rolled around the room and when she returned, she said. “I have to come back for one more second. My music teacher is Ms. Newman. Now I seriously need to get some water.”
When her grandfather handed her a cup of water, she said, “Thank you on the left hand.” Then nodded to her mother, “Thank you on the right hand.”
“I’ve got one more set of questions for you,” I said. “About church.”
“Oh, this is real important,” Ruthie Grace replied.
“Tell me about church,” I said. “What are some of the things you’ve learned?”
“One thing is reading the Bible. One thing is learning new songs. One thing is praying about Jesus. And one thing is learning to meet new kids…” After a brief break from her list, she told me, “… and one thing is you.”
Mendy said, “She has had some real separation anxiety but church has helped her overcome that.” The three of us talked about some of the kids she’s known over her four years. 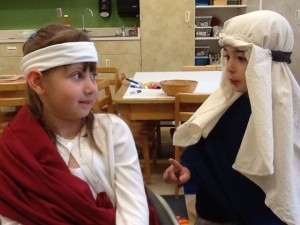 “It’s been hard socially,” Mendy added. “A lot of the improvement has been people who love on her and know her name.”
I had one last thing to do before wrapping up. “Now I just need to take your picture,” I said.
“Oh, thanks. I love pictures.” Ruthie Grace posed for a few shots, and with that deed done, it was time to go. “If you have any more questions, you can ask me now because we’re about to leave,” she said.
Until and unless you’ve been around children who have special needs, Mendy observed as we stood to go, “You forget that they’re first and foremost a kid. When Ruthie said what she does in the morning, the braces were the last thing she mentioned.”
________________
“In the Preschool Room with Ruthie Grace” is part of a continuing series by Minnie Lamberth called People I Met at Church. Originally posted October 2013 at www.minnielamberth.com.

2 thoughts on “In the Preschool Room with Ruthie Grace”