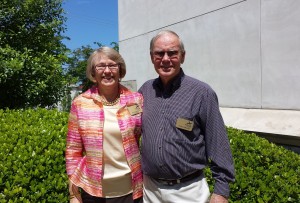 In 2005, when Evelyn and Wesley Robinson moved back to their hometown after 44 years away, they intended to join a local congregation. “We’ve always been really involved in church,” Evelyn said. Their daughter, Edith Singleton, and her family were attending First Baptist Montgomery and wanted them to go where they went.

“We weren’t going to belong to a First Baptist,” Evelyn said. “It was too big. We wouldn’t fit in.” So, with their commitment not to join firmly secured, they visited First Baptist one Sunday in December. They followed that visit by joining the next Sunday. It’s been 10 years now, and so far, they seem to be fitting in.

“We both grew up in Montgomery,” Evelyn said. After four years of dating, “We got married as soon as I got out of high school.” That was 1963. Because Wesley was in the Air Force, the couple first went to Detroit, then to Fairbanks, Alaska. When Wesley got out of the service, he started working with IBM, and they moved to Rome, Georgia. Evelyn worked with the local board of education there, and that’s where they stayed until their move to Montgomery.

The Robinsons are a friendly couple, and they both serve as church greeters between Sunday school and the 11 a.m. service. So they help others fit in too.

Wednesday, Evelyn said, is her day at the church. She starts with her volunteer shift at the Caring Center, where she talks to people who have come to the Center to ask for food. She said, “I want them to feel like we love them in Jesus’ name. That’s the only reason we do it. I want them to feel like they’re a person, and they’re loved as much as the next person who comes along.” So, she goes through a set of questions to determine if they meet the income level, then asks, “Is there anything I can pray about before you leave?”

One thing she’s learned from this experience, she said, is “how blessed I am. I want for nothing. I need nothing.”

Evelyn leaves the Caring Center at 11:30. “Then I go across the street and answer the phone for an hour until the receptionist comes back from lunch.”

The Robinsons are on call when the church kitchen needs their assistance – sometimes filling in when needed, and helping out for special events. “We both do that,” Evelyn said.

And sometimes Wesley fills in at the Caring Center too, helping people complete their cards requesting assistance. The Robinsons also operate two and a half booths at Amy’s Antique and Flea Mall, though, and that keeps him pretty busy.

Antique booths are nothing new for the Robinsons. “We’ve done it for years,” Evelyn said. “In Rome, we had booths. When we moved here, we needed something to keep us out of trouble.” She said they sell “furniture, glassware, outdoor concrete stuff, anything that’s interesting.” But most importantly, they give the proceeds to missions – to Children’s Hope’s Haiti initiative, in particular, which they have also supported with their service during mission trips.

“I love Haiti,” Evelyn said. “It’s a third-world country. What I’ve learned is ‘stuff is not important.’ We need to learn to live day by day. They’re wonderful people. Kind, gentle people. They worry about feeding their family today. Tomorrow, they’ll worry about tomorrow.”

Evelyn has been to Haiti on mission five times over the last four years – three of those trips were with groups for one-week visits; the other two were with Wesley for extended stays of four and five weeks.

On her first trip, Evelyn made drapes and helped get the Alabama House ready for people to come down for visits. On her second trip, she worked in the orphanage and helped with Bible school. Her third trip was also to help with Bible school. On her fourth trip, this time with Wesley and for five weeks, the orphanage was moving locations, and she helped move the children to the new location.

Her most recent trip, also with Wesley, was for four weeks during the early part of 2015. “We got the dental and medical clinic ready. Wesley worked on that. I was the gopher – helped in the orphanage, changed beds and sheets when the teams would change out, helped them cook.”

If you know the Robinsons, you might know that Evelyn calls Wesley “Eugene.” That’s his middle name, and that’s what he was called growing up. So, given that Evelyn has known him since her school days, and that’s what she’s always called him, that’s what she still calls him. But as she explained, “When you go in the service, they use your first name.” Therefore, when the U.S. Air Force decided to call him Wesley, most other people did so too.

By whatever name we are called, it’s important to be known. Whether we are entering a big church, or in need of food, or living in an orphanage in a third-world country, it matters when someone greets us and recognizes who we are as children of God. And, of course, does so on behalf of the Name that is above all.

“And this is his command: to believe in the name of his Son, Jesus Christ, and to love one another as he commanded us.” 1 John 3:23 (NIV)

This story is part of “People I Met at Church,” a continuing series by Minnie Lamberth. For more, visit the Church Stories page.

4 thoughts on “Caring for Others with Evelyn and Wesley”