In December, my colleague Slats Slaton was enjoying his first Christmas 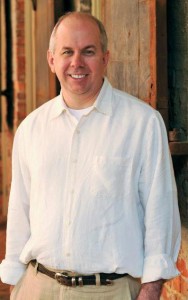 season as author of a novel that would be a good gift for those who like stories about Christian fathers giving sound advice to their teenage daughters. I was helping him make connections at stores in town, and once his book, Bread Crumbs, was in Cloverdale locations, I said, “I know a guy from church. He has a gift shop in east Montgomery, and I think his customers would like your book.”

I explained that this man is an artist — a creator of paintings with faceless angels — and from what I can see on Facebook, people love him and his work.

“He’s intimidating,” I said. Then I explained, it’s not his talent, for I’ve worked with many talented people. It’s this. Donnie Sasser can post on Facebook something like “if only I had a cupcake,” and somewhere in Montgomery, one of his friends will stop what she’s doing, or make it a part of what she’s doing, and bring him a cupcake.

Slats said, “That is impressive.”

Indeed. Donnie is that kind of Facebook friend who can post anything that comes to mind and get 23 likes in 60 seconds. His witticisms are legend. During Auburn’s heart-stopping performance in the BCS national championship game, he posted, “I’m passing out nitro pills like skittles on Halloween.”

On Christmas Eve, he offered help: “I will be selling batteries, duct tape, extra parts and pieces at the corner of Vaughn and Taylor from 11pm until 2am.”

Near Halloween, he posted, “Dollar General at 5pm on a Friday, there’s not a haunted house in the world that can compare to this scary place.”

In January, he observed, “School Holiday – That’s French for ‘Eat at Chappy’s.’”

That’s what Donnie is like on Facebook. So I set about to find out more, and I stopped by Two Blessings, his store in Vaughn Plaza, to ask him about Facebook, his service in preschool ministry, his life as an artist, and his affinity for cupcakes.

“I’ve made a lot of friends on Facebook,” he said after we’d taken our spots, on one of the coldest days of the year, in a chilly storage room/office. He warned me that I would be cold, and at first I denied any such thing, as any good interviewer would do. I even took off my coat. It later became apparent to me that I was growing colder as the story progressed; nonetheless, our in-person chat started with his online identity on Facebook.

“I use it as a tool for humor and honesty,” Donnie said. “I don’t get serious or political. A good bit of the time, it’s just making fun of myself.”

He added, “I think that it catches people off guard because I’m so quiet in person. But when they get to know me and read things I’m thinking and saying out loud – that’s been the most fun part for me.” 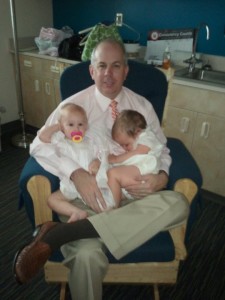 Sometimes Donnie posts about rocking babies at church on Sundays, so I asked him about that. “It’s my favorite job in the whole world,” he said. “I’ve been doing that for going on nine years.” In this preschool class for children ages six months to 12 months, he’s served with the same five people the whole time: Jane Glover, Elise Sailors, Joni Sartwell and Donna and Randy Johnson.

“We all came in about the same time. We all just stayed together,” he said.

“That Sunday experience sets the tone for my entire week. If for some reason I’m out – for market or wherever – I can’t wait to get back.”

He added, “All they expect from you is to ‘love me till my parents come back.’ They have no other expectations in the world.”

Donnie is a parent of two himself – a daughter, 21, and a son, 17. He said that many people have wondered if he named his store, Two Blessings, for these two children. But he was thinking something more like this: “I wanted the person who buys the gift and the person who receives the gift to be blessed as well.” Thus, two blessings are taking place.

While his two children may not be the reason for the store’s name, they are the reason he has become known as a painter of faceless angels.

“It started as a lesson for my children about how you behave when no one’s looking,” he said. The idea is that he was asking them, “Were you somebody’s angel today? Did you find an opportunity to do for somebody else?”

I was surprised when he told me this part of his story: “I’ve never had an art lesson.” The closest he came, actually, was when he knocked on the door of a neighbor’s house. She was a retired art teacher with rheumatoid arthritis, and it took her a really long time to get to the door. Donnie said, “I decided to cut her grass instead of art lessons.” So he offered, she accepted. Her lawn was mowed; he didn’t take lessons. 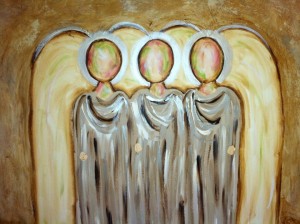 his children. “The first one I gave to a friend, and she gave them to her friends and family for Christmas. It just took off from there.”

Donnie said these angels were always faceless – the idea being that it can be anybody the person wants it to be, which could change daily.

For a long time, Donnie painted at night, until 12 or 1 in the morning, after working a full-time job at Fed Ex/Kinkos. But that changed in December 2010, when he became a full-time artist. Donnie said, “That was a huge leap of faith – to have your daughter planning to go off to college and leaving a company like Fed Ex.”

But it worked out. He took another leap of faith again when he opened his gift shop in April 2013. “It’s been a great first year,” he said.

And about those cupcakes? “I just love cupcakes,” Donnie acknowledged. “I get that from my grandfather, actually. He had a sweet with every meal.”

Donnie told me that his grandfather had suffered from Alzheimer’s Disease. “He might not have known who you were, but he knew you were going to get a slice of cake at the end of the meal.”

And it’s true what I said. Donnie confirmed that people bring him cupcakes. “They do,” he said. “If I mention I’m in need, somebody will show up with a cupcake.”

“Rocking Babies with Donnie” is part of a continuing series by Minnie Lamberth called, “People I Met at Church.” Visit the Church Stories page to read about other fun folks from First Baptist Church.

8 thoughts on “Rocking Babies with Donnie”