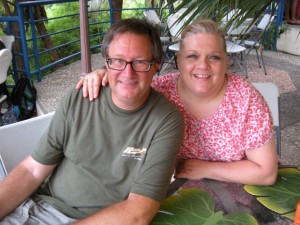 Joy and Tommy Schwindling started attending First Baptist Church Montgomery when their son T.C. was in seventh grade. He had become active in the youth group and talked his parents into joining too. I met them a few years ago in the church kitchen, where Joy spent her Wednesdays as a volunteer. Tommy sometimes came to the kitchen when he got off work; he was service advisor at Classic Cadillac.

During this time, the Schwindlings took a mission trip to Niger, sponsored by First Baptist and led by Patty Roper. The team taught Vacation Bible School to the children and led a men’s Bible study and a women’s Bible study for the adults. The two-week trip also changed the direction of the Schwindlings’ lives. They began to sense that they were called to the mission field.

“Haiti came up because we were in Andy Birchfield’s Sunday school class,” Joy said. Andy and his wife Tanya had founded Children’s Hope, an orphan ministry of First Baptist, which focuses on adoption, foster care, and orphan support. The third component of this ministry involved a group of 16 children living in a tent in Jacmel, Haiti. The goal was to step out in faith and build a permanent home for these children, and this goal became part of the continuing prayer requests voiced to the Sunday school class.

“They would say every time, we need a couple to go there and take care of the orphans,” Joy said.

One day after Sunday school, Tommy said to Joy, “I think we’re the ones who are supposed to go to Haiti.”

Each year, the mission house in Haiti hosts about 40 mission teams from various churches. “They all come for a purpose,” Joy said. They might be construction crews or be there for Vacation Bible School. They might be there to conduct medical clinics or teach Bible study to adults. The Schwindlings were there to plan the activities, prepare the meals, coordinate the drivers, provide water and anything else needed to facilitate the teams’ visits.

Tommy also fixed anything that was broken. He designed the mission house, planned the rooms, figured out the materials – concrete, lumber, doors, furniture – and placed the orders as the teams progressed in the work, and he facilitated many other projects as well. “In the four years we were there, we built 10 churches, a medical clinic, a mission house, one school and an aquaponics (a facility for sustainable fish and plant growth),” Tommy said.

The Schwindlings learned important lessons during their stay in Haiti. “I learned to love different people,” Joy said, adding, “You need to take care of people because God made everybody. You don’t need to take every responsibility for them. You need to teach them and help them along the way.” 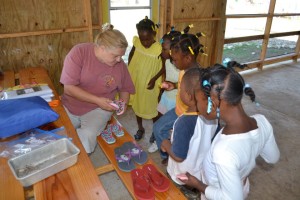 Tommy said that he learned “to be content with what you have, and God always provides something when you need it, not when you want it. If you want to be where God is, you need to be where He is at work and join Him. We saw so much of God’s work. It was stuff you just couldn’t do on your own. It was miracles.”

Joy cited one of the miracles where God was clearly at work. “We’d just gotten a girl in the orphanage,” she said. This was a 14-year-old who had been a child slave and had run away. The girl had heard from a school friend about Children’s Hope, and she had run there to escape her situation.

One day, the Schwindlings and Amsters (family visiting from FBC) were supposed to take the older kids from the orphanage to a youth conference at a church in the area. But Tommy had to stay behind to make a repair at the mission house.

“Tommy couldn’t go with the team so he asked me to go with the team,” Joy said. “All that morning God had put on my heart ‘What would you do if someone tried to take one of our kids?’ I was saying, ‘God, please don’t put me through that. I’m not strong enough.’”

Joy and the Amsters loaded the kids in the tap tap (van-type vehicle) and left for the conference. “So we turned the corner to go to Pastor Paul’s church, and there was a man sitting on a motorcycle. I knew right away who he was. I said (to the girl), ‘Do you know that man?’ Her whole body started shaking.”

Joy said the man “jumped off the motorcycle, and he tried to get through that tap tap. I knew that what God had prepared me for all morning was happening. I pushed her behind me on the floor of the tap tap, and I got in front of her, and I told that man he couldn’t have her. She didn’t belong to him.

“We started praying for the Holy Spirit to come down and protect us.” As Joy explained, when the man tried to climb into the tap tap. “He couldn’t get farther than the step. It was like there was a veil.”

At that point, Andy Birchfield and another man showed up, and they took the man creating the disturbance to the police station. Joy said, “The police and judge told that man that because he couldn’t produce papers that the parents had signed her over to him, if he was ever caught with another young girl again, he would go to prison. And the girl was signed over to Children’s Hope.”

Joy said, “The whole thing is about trusting that God will take care of you. Even if you don’t think you’re strong enough, He will give you the strength. I was like a momma bear protecting her cub. God is always there with you, and He will prepare you for what you need to do, no matter where you’re at.”

The Schwindlings were supposed to stay two years in Haiti, they stayed almost four. They returned to be closer to T.C.’s family in Decatur, Alabama, and their daughter Rachel’s family in Lakeland, Florida. Their two granddaughters have been joined by a third; this month T.C. and Maegan are adopting a four-year old from the Congo.

The Schwindlings have been back in Montgomery for a little over a year, and in that time, Tommy has begun a new ministry, “HEAR Christ.”

“When we got back, I prayed a lot about what we should do. Somehow God just laid hearing aids and ministry together in my mind,” Tommy said.

As a result, he launched “HEAR Christ,” an acronym that stands for Hearing and Evangelizing A Risen Christ. “We partner with churches to collect used hearing aids from church members, having the hearing aids refurbished, go out on mission trips with the participating churches, check people’s hearing for free, share Christ and provide hearing aids to the people that need them.”

Tommy said that so far he’s partnered with eight churches, several doctors and the largest hearing aid company in the U.S. What they need now are funds to buy batteries for the hearing aids, donations of used hearing aids, and prayer for the ministry to grow and for people to partner with them. You can find out more at http://hearchrist.com/

“Sharing Hope with Joy and Tommy” is part of a continuing series of stories by Minnie Lamberth called “People I Met at Church.”  Visit the other pages of my site, http://minnielamberth.com, to read more stories and to find out more about the kind of work I do.