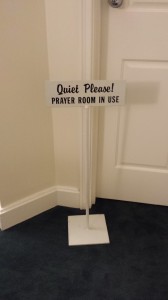 Glenda Driskill’s regular visits to the prayer room started shortly after a car accident claimed the life of a long-time member of the First Baptist Montgomery congregation.

“At Bob Duck’s Celebration of Life service, Jay was talking about all the ministries Bob was involved in and how many people it would take to fill his shoes,” Glenda said.

One of the areas the pastor mentioned was Bob’s service as a prayer room volunteer. The church prayer room is a small room near the pastor’s office. From 7 a.m. – 5 p.m. weekdays (and a little later on Wednesday), volunteers take an hour time slot to pray in that room for the requests of the congregation.

Bob’s time in the prayer room was on Fridays. Because he would be out of town that particular Friday, Bob came a day earlier for his hour of prayer. The automobile accident occurred the next day, and only a few days later, Bob left this earth for his eternal home.

“Coming to the prayer room was one of his last acts of volunteerism,” Glenda said.

As Glenda listened to all the ways that Bob served in ministry, the prayer room stood out. “I couldn’t fill all the roles. That was a place where I could step in and help,” she said. She chose the same day for her time slot. 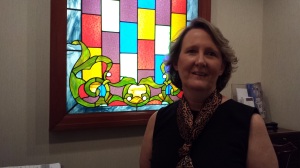 The collection of prayer requests seen by the volunteers are developed from multiple sources, including the weekly church prayer sheet, cards from the pews and tear-off sheets on the order of worship. They’re assembled into a five-inch thick notebook. Volunteers move from the back of the book to the front, covering these requests in prayer during their hour.

The wide variety of requests include those who are sick, people who are in tough places in their lives, those who are looking for a job. “A lot of grandparents will request prayer for their grandchildren,” Glenda added.

Children make a number of requests themselves. “As a former kindergarten teacher, I always love reading children’s writing,” Glenda said. “I think it’s neat to see the heart of a child because they’ll pray about anything.” 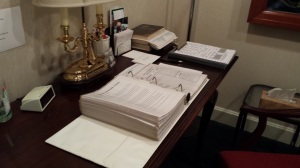 Indeed they do make requests for dogs and turtles and the hungry and the poor. They also pray for their grandparents. Glenda said that once, as requested, she prayed for a “grandfather’s sentse.” She later realized this would have been a “stent” that had been put in recently, but she knew the Lord knew that all along.

Glenda taught kindergarten in the Autauga County School System for 13 years, then worked with the system’s curriculum for another 14 years. She has since retired but continues to work with the system’s after-school program. This change in career is what gave her the flexibility to make weekday trips to the prayer room.

After we’d finished our visit and were about to part company, Glenda told me one more story. She said that her mother, who passed away last April, used to go to the prayer room at First Baptist Church in Prattville. Glenda mentioned that in her mother’s last few weeks, as family gathered around and talked with her about her life, it was her grandchildren that remembered the time she had spent in the prayer room. They reminded her of this ministry, and they knew that she had prayed for them there.

What sweet memories for children who know their names were brought before the Lord in prayer — and sweeter still for those whose prayers were heard.

Then people brought little children to Jesus for him to place his hands on them and pray for them. But the disciples rebuked them.

Jesus said, “Let the little children come to me, and do not hinder them, for the kingdom of heaven belongs to such as these.” Matthew 19:13-15 (NIV)

6 thoughts on “In the Prayer Room with Glenda”