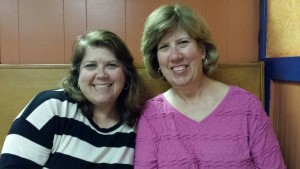 Interviewing Nancy Ausley and Allyson Hildreth for my church stories series was Jennifer Davis’s idea. She was sitting in the row behind me at a volleyball game where her daughter was on the same team with my great niece. So she said, “Minnie…” I turned, and she explained that she thought I should write about Nancy and Allyson and their experiences in childcare on Wednesday night.

Later I explained to Nancy and Allyson that they had been nominated for a church story while also adding that I didn’t realize I was taking nominations until Jennifer made the suggestion. In any case, this is how Nancy, Allyson and I ended up at San Marcos restaurant on a Monday night talking about their experiences.

Incidentally, Nancy and Allyson are regulars at this restaurant. The interview was interrupted several times by everyone on staff who came by to speak to them. “We eat here all the time,” they said, an apparent example of understatement.

Nancy and Allyson are single and best friends. They visited First Baptist together back in 2001 and have been working in Wednesday night childcare together for the last 11 years.

“Being single, we knew single people,” Nancy said. Working in childcare on Wednesdays gave them a chance to get to know other people.

“We’ve gotten to meet a lot of families we wouldn’t have met otherwise,” Allyson said.

These ladies are big Auburn fans. When they met the adorable Ellis Aday, he was wearing a bib with his name on it. “We thought he had a bib for the A-Day game,” Nancy said. “We thought, man, they are real fans.”

But someone explained, “That’s their last name.”

See how important it is to get to know people … to get clear on these little details to avoid misinterpreting bibs worn to church? Nancy later offered gentle advice to Ellis’s mother: “We told her we wouldn’t take anymore Alabama stuff.” She was just kidding (I think), as that is the nature of attending church in the SEC.

Childcare is a little different than a preschool Bible Fellowship Class which has an educational format. There, Allyson said, “We do whatever makes them happy. If they want our cell phones, they get our cell phones.”

Once, when the adorable Matthew Gay was in their room, he was playing with their cell phones. When he left, however, their phones were missing so they launched a search, finding them in an unexpected location. “Both cell phones were in the trash can,” Nancy said. “He was at that age where you throw everything away.” So, a future stewardship lesson perhaps? Some things you hand back to the owner?

One of the little boys tended to cry after his parents left him. “He was one of those who liked our cell phones,” Nancy said. “We tried to give him a fake one. That didn’t work. He knew it and handed it right back.” Yes, discernment. Always important to a developing faith.

Wednesday night childcare is available for preschoolers whose parents are in sanctuary choir, or participating in a Bible study, or working in children’s choirs – or for whatever reason they might be there on Wednesday night with young kids in tow. Childcare lasts from 5:30 p.m. to 8 p.m. when sanctuary choir is over.

Nancy and Allyson work in a room that ranges in age from newborns to 2 years old. “We keep the ones that can’t talk back to you,” Nancy said. “We really get to see them grow up because they change so much in those two years.”

As the kids change, though, there’s another transition. “When they get old enough to realize this is the baby room, they won’t come back,” Nancy said. “They say, ‘That’s the baby room.’”

“Kids are fun to be around,” Allyson added. “You just never know what they are going to do or say.” As she explained, one time she asked a kid, “Are you wet?” The little girl responded, “I have no idea.”

Nancy is a kindergarten teacher, and that persona is reflected in how the children respond to her. “I tend to attract children. Allyson will be sitting over on the other side of the room by herself. The kids will have followed me like a Pied Piper.”

Allyson is an accountant at Alfa Insurance. Interestingly, one of her duties is to follow up with people who don’t cash their checks. I was thinking this is reminiscent of the surprising number of people who leave resources untapped – such as the kind you might find within a church family.

“God sets the lonely in families,” the Psalmist said. Sometimes this happens in nuclear families, or extended families, or surrogate families, or foster families … but also in church families. Serving is often the way to find that sense of belonging within the church family.

I’ve got a couple of places of service of my own that provide a sense of belonging – Sunday preschool and Wednesday supper. I’ve found lots of help and support from the co-laborers in these areas, and I’ve gotten to meet people I wouldn’t otherwise know. I recommend it.

Nancy and Allyson added one other thought. They explained that each year right before stewardship season, Matt Bishop, a deacon and friend, came to their Sunday school room to ask for budget requests.

“Every year we asked for rockers with cushions,” Allyson said.

Nancy added, “He’d see us and he would say, ‘I know, I know, rockers with cushions.’ We finally got them.”

“In the Childcare Room with Nancy and Allyson” is part of a continuing series of stories by Minnie Lamberth called “People I Met at Church.” Take a look at the other pages on my site for more about my copywriting, ebook, art projects… and stories about other people I met at church.