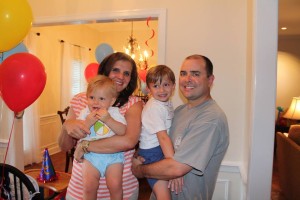 Beth and Bryan Oliver moved to Montgomery in the summer of 2010. “That’s when we started attending First Baptist,” Beth said. “As a matter of fact, it was the only church we visited.”

This was Bryan’s idea, she explained. A native of Montgomery, he had spent a lot of time in the church’s youth group. Beth was unsure about the choice but was soon was fully on board. “At first I said it was going to be too big for me, and I wasn’t going to like it. Now I love it,” she said.

In the Fall of 2005, Beth moved from Troy (her hometown) to Tuscaloosa where Bryan was still working for the University. She said, “I was working for Lamar Advertising selling billboards. At that time, he was completing his Master’s degree and was working on his Ph.D.” They married in April 2007.

Their subsequent move to Montgomery was influenced by a timely encounter. “We were at an Alabama football game,” Beth explained. “Melba Richardson (head of St. James School at the time) was sitting behind us at the football game.” Bryan told her they were from the Montgomery area and would like to return. He asked if she had an opening to let him know. That spring, she did just that.

“He started out as one of the high school counselors,” Beth said. At that time, she was a pharmaceutical rep. “I had a really big territory. I was able to pick up and move without it causing any trouble for me.” The young couple also had a housing situation that was just right for relocation. They had sold their first house, attempts to buy their next house had fallen through, so they were in an apartment and could easily leave. “It was a God thing,” Beth said.

In 2012, Bryan became high school principal for St. James. Beth is currently Sales and Associate Member Coordinator for the Alabama Bankers Association. And they have two adorable sons. John Rivers will be five years old in October; little brother Rex was a year old in July. 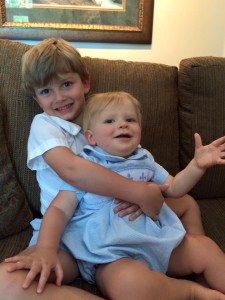 “I think it’s very important for our children to be in church,” Beth said. “Bryan and I both feel that if we don’t get them in church now, the older they are, the harder it’s going to be to get them active. You have to plant those seeds early.”

She added, “I love our preschool department. Everyone there wants to foster a love for Christ. I can see from John Rivers’ prayers. I just know he is being taught the right things. I credit some of that to us and also credit him being in church, Sunday school, Mission Friends and choir.

“I believe it’s our job as parents to lead him to Jesus and to teach him the Gospel. In the end we will be held accountable for that.” 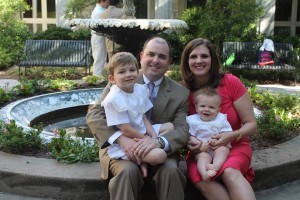 Beth and Bryan are members of the Mark Williams Sunday school class, and Bryan serves as deacon and Beth volunteers as a quarterly teacher in kindergarten Sunday school. “I love the people, all the ministries.” And she feels God’s presence. “He’s using our church to do His works in Montgomery and around the world. It’s a happy, good place to be.”

This story is part of a continuing series called “People I Met at Church” by Minnie Lamberth. Visit the Church Stories page to see more or take a look at the other pages to learn about the kind of work I do.