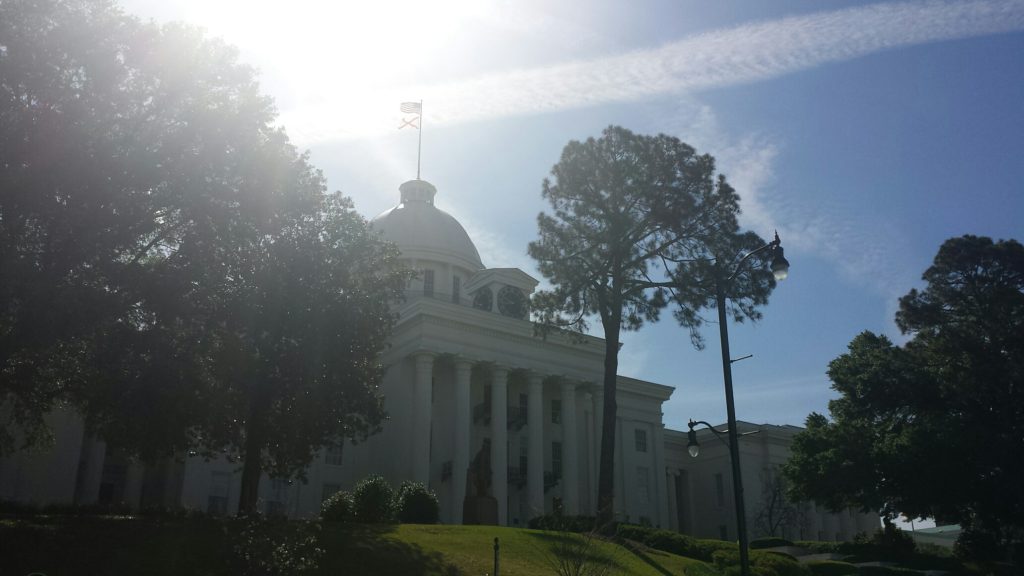 My experience within the proximity of Alabama politics began when I was in third grade. My mother and I were visiting relatives in Montgomery. We went for lunch at the Morrison’s Cafeteria on Lee Street, and there we saw a man who was at that moment former Governor George Wallace. This was after his first term, after his late wife’s abbreviated term, and before his second. My mother’s aunt introduced us, and as Governor Wallace greeted us, he pulled out a picture postcard of himself and gave it to me.

How did he know that I would take this postcard to school the next Monday? He must have had a sense even then about word-of-mouth marketing strategies, for I surely did. I took the postcard to school and showed it to my teacher before the bell rang. Her little boy, a first grader, was in the room at the time. She said, “Show it to him. He’ll know who it is.”

Frankly, I thought that was a crazy suggestion. How could a first grader know the identity of the man on the picture postcard if I had only learned it myself two days ago? The little boy studied the card and finally, with hesitation, asked, “Is it Nixon?”

See? I told you he wouldn’t know. But it was sort of impressive that a first grader could pull the president’s name out of the hat like that. I don’t think I’ve seen that little boy since third grade, but I understand that when he grew up he entered the political communications field. So, in hindsight, this exchange makes sense.

The next time I met a man about to become governor, I was a young copywriter working for a Montgomery ad agency. We were responsible for a big event in Atlanta, during which Governor-elect Guy Hunt, George “Goober” Lindsey and the tourism director were to speak about Alabama’s attributes as a tourist destination.

As I sat at a table in a convention hall, anonymous among 3,000 people, I took note that I had written all of the remarks that the people read from the podium that day (except the invocation). I was marveling that everyone was listening to words I had written. But what I remember especially is thinking that it should be more of a pinnacle than it was. It was one of those moments where an amazing experience was matched by a general awareness that whatever was happening was not enough to bring meaning to my life.

During my work at the ad agency, changes in the office of Governor had affected who was selected for state contracts, which affected workload. I had hoped to avoid the political ramifications of having (and losing) state contracts following elections. So I took an opportunity to move into a job in state government. In which I stepped even deeper into political ramifications. “It’s one of the most political agencies there is,” I was told of my new agency. “Every year there’s a bill to abolish it.”

Still, the role itself was easy to manage, and I had a supervisor who treated me well.

We had lots of governors during my time there. Guy Hunt was removed from office, so we shifted direction during the brief Jim Folsom Jr. term, then we shifted again when Fob James came back as he defeated Folsom.

Eventually I segued and began to work for Huntingdon College part-time while I prepared to write full-time. During my tenure there, a gubernatorial campaign was afoot, and one of my very favorite colleagues on campus was expressing dismay about the accusations that challenger Don Siegelman was making about Governor James. She was quite put out. Very put out. And I remember distinctly that she said: “Uncle Fob just wouldn’t do that.”

I had heard that she was the governor’s niece, but when you hear someone say “Uncle Fob” it really comes home. And this was, once again, a reminder of being careful about expressing political opinions – and social media hadn’t even been invented yet.

The Governor Next Door

After Huntingdon, as I began to work on my own, I rented an office space within a friend’s place of business on North Hull Street. He and his wife, early in their marriage, had lived in a really cute house on Perry Street next door to the Governor’s Mansion. They said there was great security, given that a state trooper was always sitting outside their house.

One day in a workplace conversation, I had suggested to my friend Adams, a writer, that if he had been keeping a journal when he lived there, he could have written a book called “The Governor Next Door.” That would have been cool. He did offer up one story of how the tall and lanky Guy Hunt used to ride his bicycle on the grounds. Sometimes they would look out their window and all they would see was the governor’s head floating above the fence. Fascinating tidbit. It would have been a great book.

So let me get to this part of the story.

When I began working in state government, I was renting an attic apartment in a single-family dwelling, and Kay Ivey was the family’s next-door neighbor. She and I became driveway acquaintances. Then she hired me on the staff at the Alabama Commission on Higher Education.

A couple of weeks ago, on Palm Sunday, I was sitting in church just a few minutes before the 8:30 service when I saw Kay sitting alone in a pew. I thought to myself, “I better get up and go speak to her.” She had a lot going on.

So I walked over and gave a big, “Hey, Kay,” and she responded with a friendly, “Well, Minnie Lamberth.” She has always greeted me that way.

I reached down and hugged her and said, “I will be praying for you.”

She said, “Thank you, and pray for the state too.”

We didn’t have a long conversation, but there was just something about taking a moment to acknowledge that something big was about to happen. At the same time, we come at these things from different perspectives. Kay has pursued political activity over her whole career, just as I have wished to avoid it to the extent possible in Montgomery. Yet the fact that this was church, where hearts are a little more open and often more vulnerable, made those few moments, for me, the sweetest exchange we’d ever had.

I was glad I walked over to her pew that Sunday morning. By the end of the next day, she was our governor.

Four takeaways from this story:

Don’t commit crimes or abuses of power. Especially if you’re a governor. But, really, it’s not a good idea for anyone.

On the way up or down, be nice to everyone. Before I met the late George Lindsey I was told, “He’s not very nice.” This was surprising information as Goober had always seemed affable on camera. In any case, I had given him his script; he read it through. I asked if he wanted to read it again. He held up a finger and shook it at me as he said, “At these rates, you don’t rehearse.”

I remember thinking, “That wasn’t very nice.” His remark didn’t cause me any harm. It was one tiny exchange, but I have never forgotten that during that one encounter, he matched his reputation.

Cross the room to speak to people when you get that nudge to do so. I remember well in my mother’s last days that she and I had delivered a baby gift to one of her friends to give to that friend’s son – a well-positioned and successful man. And when that son saw my mother in a restaurant, he left his table and crossed the room to thank her effusively for the gift. In that experience, there were simple and lasting lessons about honoring someone above yourself, as Romans and often our mothers remind us to do.

Pursue your purpose over your tasks. Every job has lots of things to be done. But within each opportunity, there is an underlying purpose to be achieved. Stay focused on the purpose, because the tasks and sometimes the jobs will change and evolve. I was always a writer; I’m still a writer. But a lot has changed, even if I’m still doing what I always did.