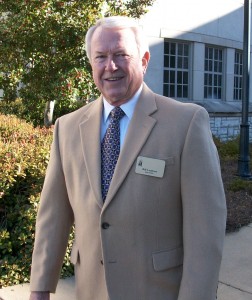 In addition to his trips to Brazil, Bill is in his tenth year of annual travels to Guatemala to dig wells. When this team goes, they’re in a village for four days. It takes four men to run the rig, so they have eight guys who rotate on and off.
“While off the rig, we’re making personal contact with the kids. It’s like the circus has come to town,” he said. With the equipment running and all the noise, the project attracts lots of onlookers. They’ll have jump rope, Frisbees. On Wednesday night, they show the Jesus film, then on Thursday they dedicate the well with a preaching service. “We give every family in the village a Bible and give all the kids a treat,” he said.
Bill grew up in Louisiana, graduated from LSU, then was drafted into the Air Force during the Vietnam years. While he was at Keesler Air Force Base training to be a communications officer, he attended a Baptist church. 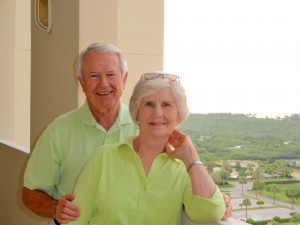 During Training Union one night, he met his future wife Phyllis. They dated in person for six weeks until Bill left for an assignment in California.
“Our courtship was by mail – handwritten, ‘put in the mailbox’ mail,” he said. They even got engaged through the mail. He sent the ring to her father, made a phone call and asked for her hand. Then Phyllis got on the phone, and he proposed. “I didn’t see her again until I came home to walk down the aisle.”
Must have worked out OK. They’ll have been married 50 years in June.
______________
“On the Sidewalk with Bill” is part of a continuing series by Minnie Lamberth called People I Met at Church. Originally posted in February 2013 at http://minnielamberth.com.